The efficiency and speed of the TruSpec Micro CHN and CHNS is a result of the unique combination of a flow-through carrier gas system used in conjunction with individual highly selective, infrared (IR) and thermal conductivity detection systems.

A weighed micro sample is placed into the autoloader of the TruSpec Micro and is automatically dropped into the high-temperature combustion furnace, allowing the sample to combust. This combustion converts carbon to CO2, hydrogen to H2O, nitrogen to N2, and sulfur to SO2. The combustion gases are swept from the furnace, through scrubbing reagents, and onto the detection systems as they are being released. Independent IR detectors are used for simultaneous detection of carbon, hydrogen, and sulfur. Nitrogen is measured using a thermal conductivity detection system. The entire analysis cycle is complete in approximately 4 minutes.

The optional micro oxygen add-on module enables the TruSpec Micro to determine oxygen content in organic matrices and is compatible with the both the TruSpec Micro CHN and CHNS models. Samples being analyzed for oxygen are placed into the autoloader of the micro oxygen add-on module and automatically dropped into a high-temperature pyrolysis furnace. The oxygen released during pyrolysis of the sample reacts with a carbon-rich environment in the furnace to form CO. The CO is swept from the furnace and converted to CO2 before measurement via infrared detector (approximately 1 minute analysis time).

« back to product menu 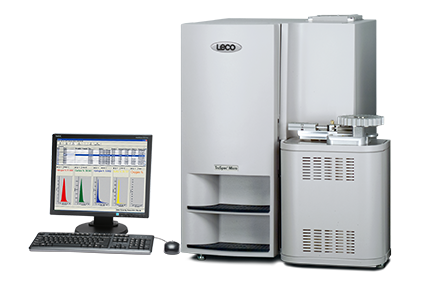